Jordan James Parke, the 23-year-old British makeup artist, who has spent $150,000 on plastic surgery to look like his idol Kim Kardashian, isn't done with his transformation yet. The Manchester resident has already paid big bucks on medical procedures like lip fillers, a chin filler, Botox and eyebrow tattooing, but now he wants to get a big butt just like the bootylicious Keeping Up With the Kardashians star. 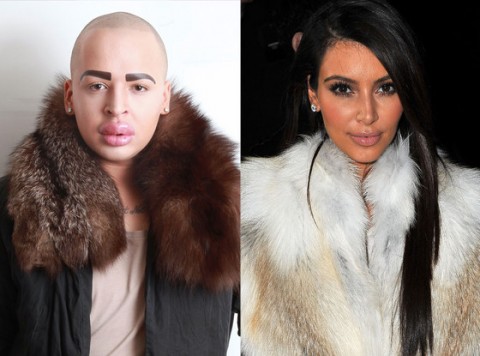 Loo-C
Honestly with these two photos next to one another, I can't tell which one is Kimcow and which one is the nutjob--they both so identically fugly. And besides, why should anyone be surprised that one mentally ill-person wants to look like another mentally-ill person?
eonline.com

barbara
The doctor must have been drunk when he did the surgery.
cambio.com

Brenda Zillman
What are with these so called stars, there is nothing special about any of the Kardashians, they try to make ordinary people to feel bad about themselves so people have to look act and become one of them to have a life give me a break they are nothing but glorified junkies.
etonline.com